How artist Richard Harlow changed his style after going blind 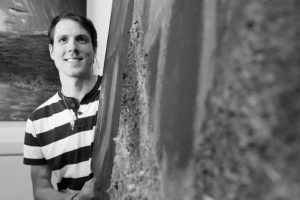 When a car struck Richard Harlow, it was a hard nudge to let the Nanaimo artist know it was time to carry a white cane.

“It was kind of a wakeup call that I need to learn how to adjust,” said Harlow, 28, who was losing his vision.

“So, I learned how traffic lights had different beeping sounds and I learned how to really listen for traffic. And I just started to pay more attention to auditory things instead of trying to carry on with my failing vision.”

Harlow, now enrolled at Vancouver Island University, studying psychology and art, began to lose his vision in 2009. It was a rare disease known as Leber hereditary optic neuropathy that left him with only limited, peripheral vision.

The white cane is not the only adjustment for Harlow in dealing with vision loss.

He has also studied Brazilian jiu jitsu to cope with the bullies and muggers the white cane seems to attract. As an artist, he has learned new techniques of mixing paint and applying it. And he has become an outspoken advocate for people with disabilities.

To read the full article, please click on the link below: